The BEST homemade cinnamon rolls ever. If you love fluffy, soft, and absolutely delicious cinnamon buns, this is the recipe for you! Learn all of my tips and tricks, to make everyone’s favorite homemade yeast rolls including options to make them overnight or ahead of time.

Cinnamon rolls are one of my favorite pastries. They are perfect for breakfast, brunch, a midday treat, and even make a great dessert! This is my tried and true Homemade Cinnamon Roll recipe. It makes big, soft, and gooey cinnamon rolls that you will go crazy over! You’ll never need another cinnamon roll recipe again!

These gooey homemade cinnamon rolls are a truly treat. They are one of my favorite recipes that I have been perfecting for years.

The dough is a sweet rich dough that becomes soft, fluffy, and flakey once baked due to the amount of fat content that it contains. The filling is your classic cinnamon roll filling - butter, sugar, and cinnamon. As far as the topping goes, I LOVE a cream cheese icing on my cinnamon rolls.

For the filling and baking you will need:

How do you make cinnamon rolls?

The first step to any cinnamon roll recipe is to make the dough. The high levels of fat in rich sweet dough from the butter and eggs make the dough very soft.

I like to use Fleischmann’s® Yeast Rapid Rise Yeast. It is an instant yeast which means that you don’t have to let the yeast proof before adding the butter and sugar, which inhibit fermentation.

Before making the dough, you’ll want to bring all of your ingredients to room temperature. This will help create a uniform and smooth dough. Room temperature ingredients will also help the dough rise. Make sure that your melted butter is warm and not too hot. If it is scorching hot, you run the risk of killing the yeast.

Our homemade cinnamon roll filling is made with three simple ingredients:

The butter needs to be very soft, so that it is easy to spread over the dough. To make the rolls extra special, you can also brown the butter. Just make sure that it has some time to cool before adding it to the dough.

I always use dark brown sugar for the filling, but light brown sugar will taste just as great!

How to Roll Cinnamon Rolls

After your dough has risen until it is double in size, you’re ready to begin rolling your cinnamon rolls.

The dough will be very soft, so make sure to lightly flour your surface and the top of the dough for easy rolling.

Roll the dough out to a 16x20-inch rectangle. Spread the softened butter over the dough and then sprinkle the cinnamon sugar on top. Roll up like a jelly roll, beginning from a long end. Cut into 12 rolls.

How to Cut Cinnamon Rolls

To get uniform sized cinnamon rolls, I like to use a ruler to mark where I will be making each cut. Before measuring, trim off 1 inch from each end. Then use a sharp knife to make a mark every 1 ½ inches.

To prevent ruining the shape of the cinnamon rolls, I recommend using unflavored floss to cut the rolls. Slide the floss under the log and then cross each end of floss across each other. Pull to run the floss through the dough and you will end up with a clean sliced cinnamon roll!

Alternatively, use a very sharp knife to cut the rolls.

The Secret to Gooey Cinnamon Rolls

When it comes to cinnamon rolls, I prefer them big, soft, and gooey, just like the ones that you find in malls or at Cinnabon stores.

The secret to gooey cinnamon rolls is to add heavy cream to the cinnamon buns before baking. The cream makes the rolls gooey and irresistible.

After your cinnamon rolls are shaped and cut, allow them to rise in the baking pan for about 30 minutes. Right before you are ready to place them into your preheated oven, pour warm heavy cream over the rolls.

If you don’t have heavy cream on hand, you can use half and half, whole milk, or evaporated milk instead.

How to Make Overnight Cinnamon Rolls

If you would like to have fresh baked cinnamon rolls for breakfast, I recommend using the overnight method. After you have shaped and cut the cinnamon rolls, arrange them in a parchment paper line 9x13-inch pan. Cover the pan with plastic wrap and refrigerate overnight.

The next morning, remove the rolls from the refrigerator and let them sit at room temperature for 30 minutes.

If your rolls did not rise while in the fridge, allow them to rise for 45 minutes to 1 hour instead of 30 minutes.

Then, pour the cream over the rolls as directed and bake. 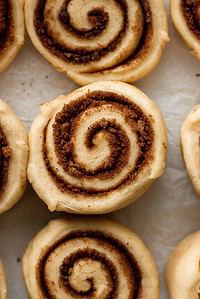 Angelina
The BEST homemade cinnamon rolls ever. If you love fluffy, soft, and absolutely delicious cinnamon buns, this is the recipe for you! Learn all of my tips and tricks, to make everyone’s favorite homemade yeast rolls including options to make them overnight or ahead of time.
5 from 3 votes
PRINT RECIPE PIN RECIPE
Prep Time 2 hrs
Cook Time 30 mins
Total Time 2 hrs 30 mins
Course Dessert
Cuisine American
Servings 12 cinnamon rolls
Calories 597 kcal 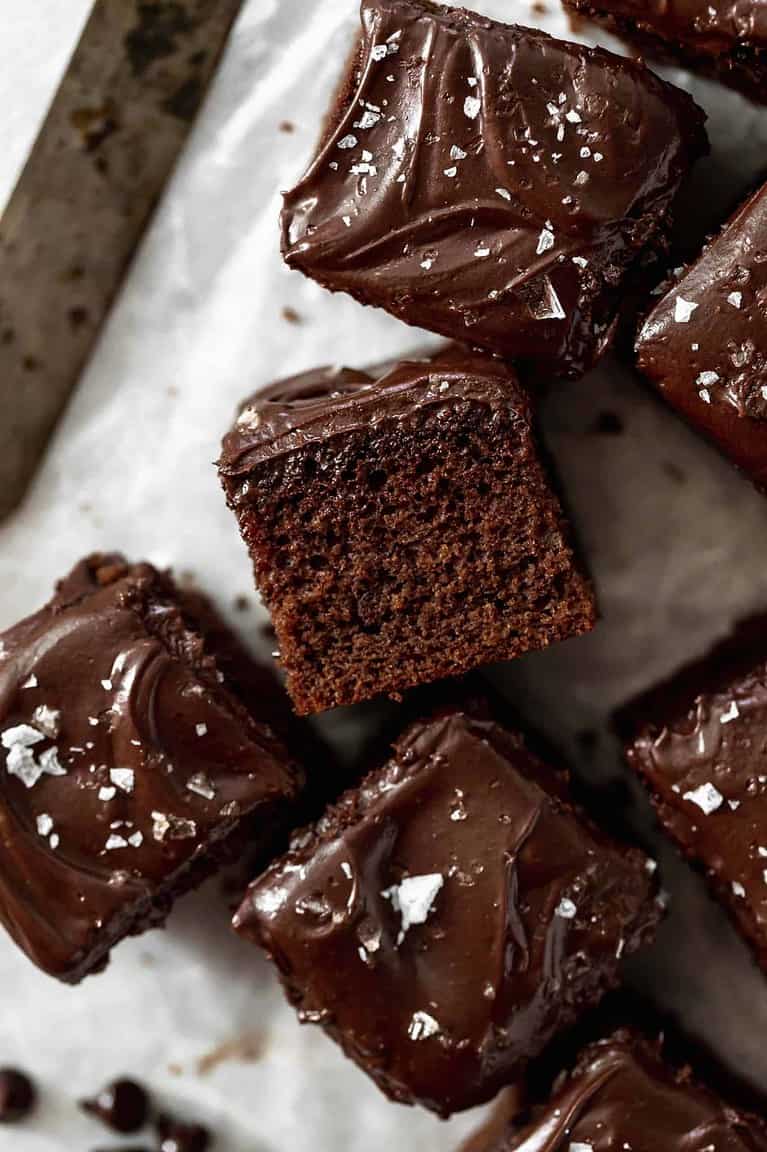 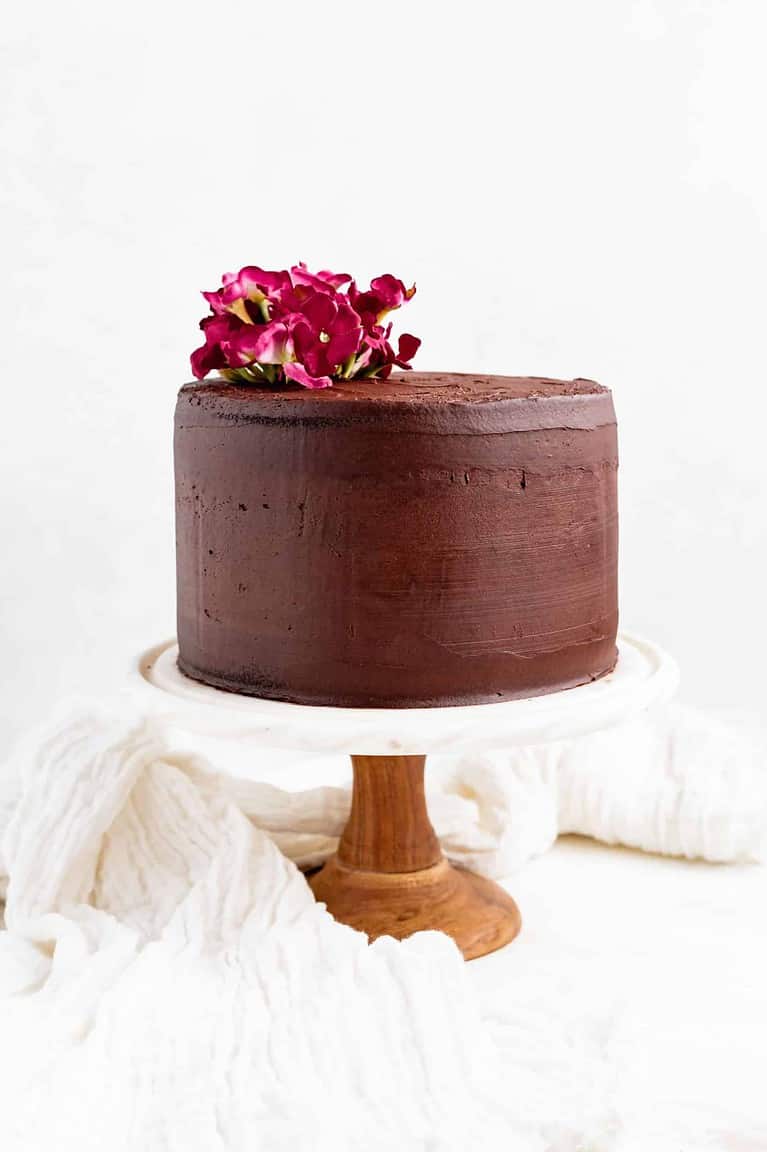 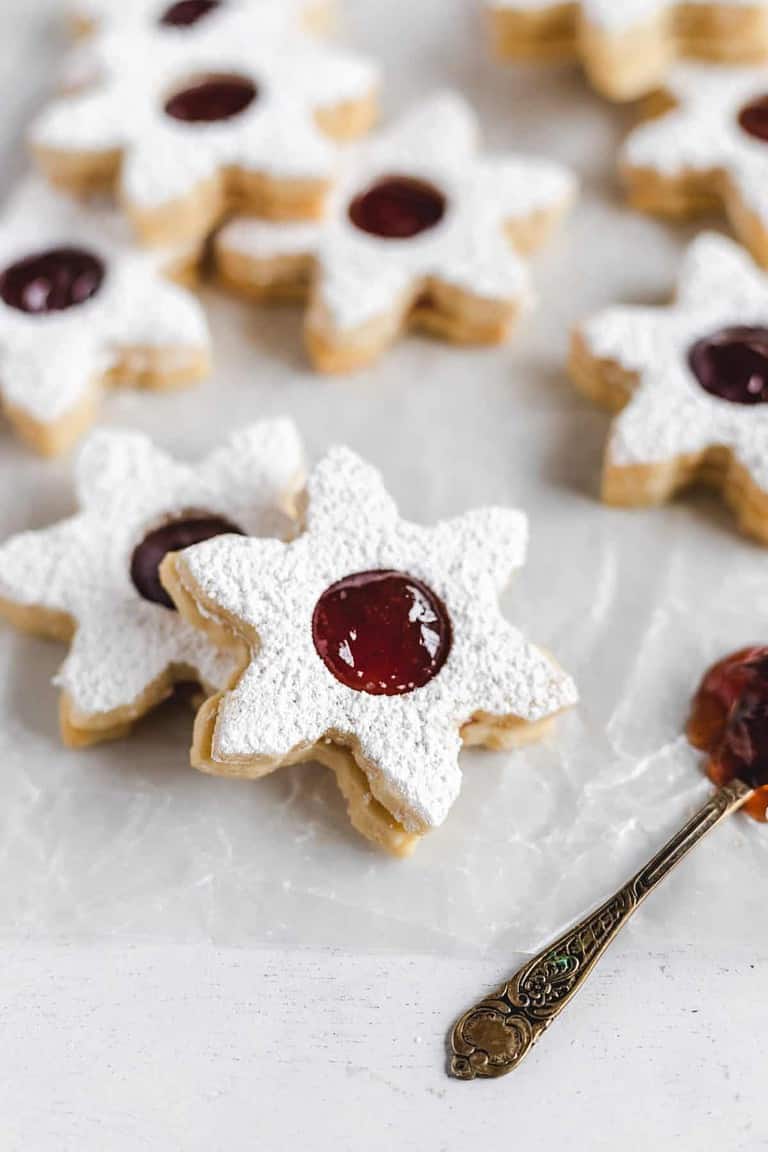 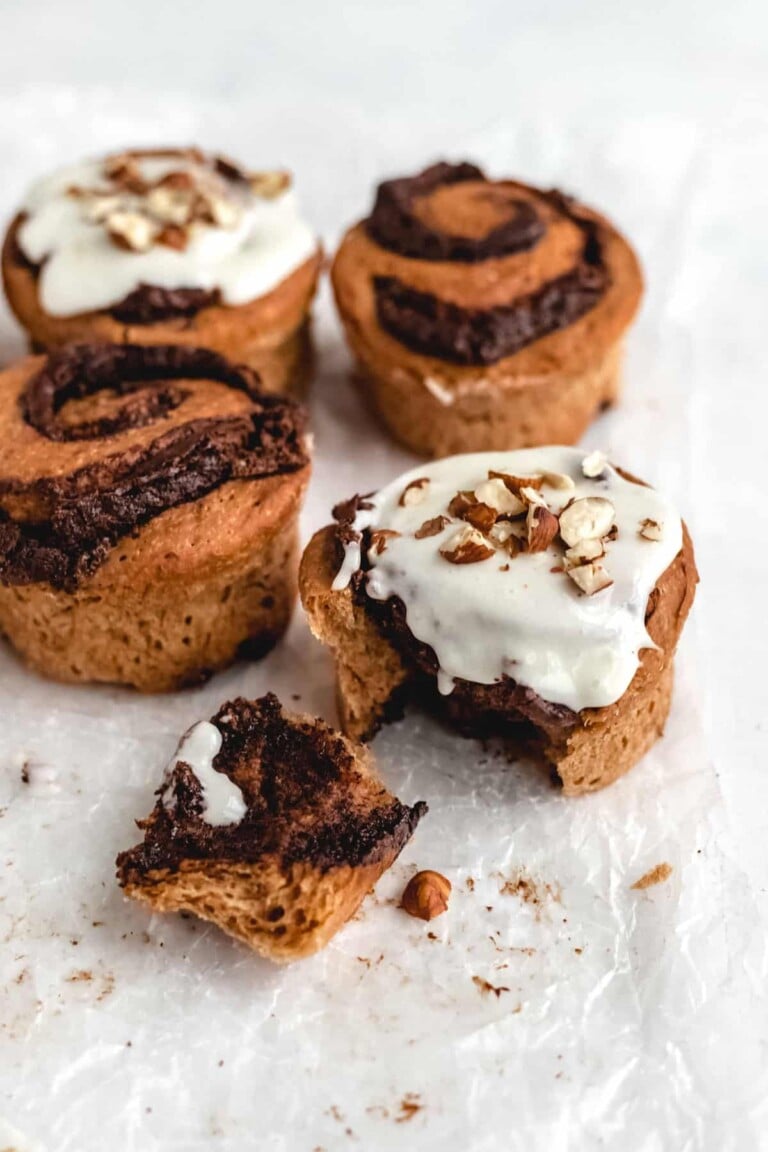 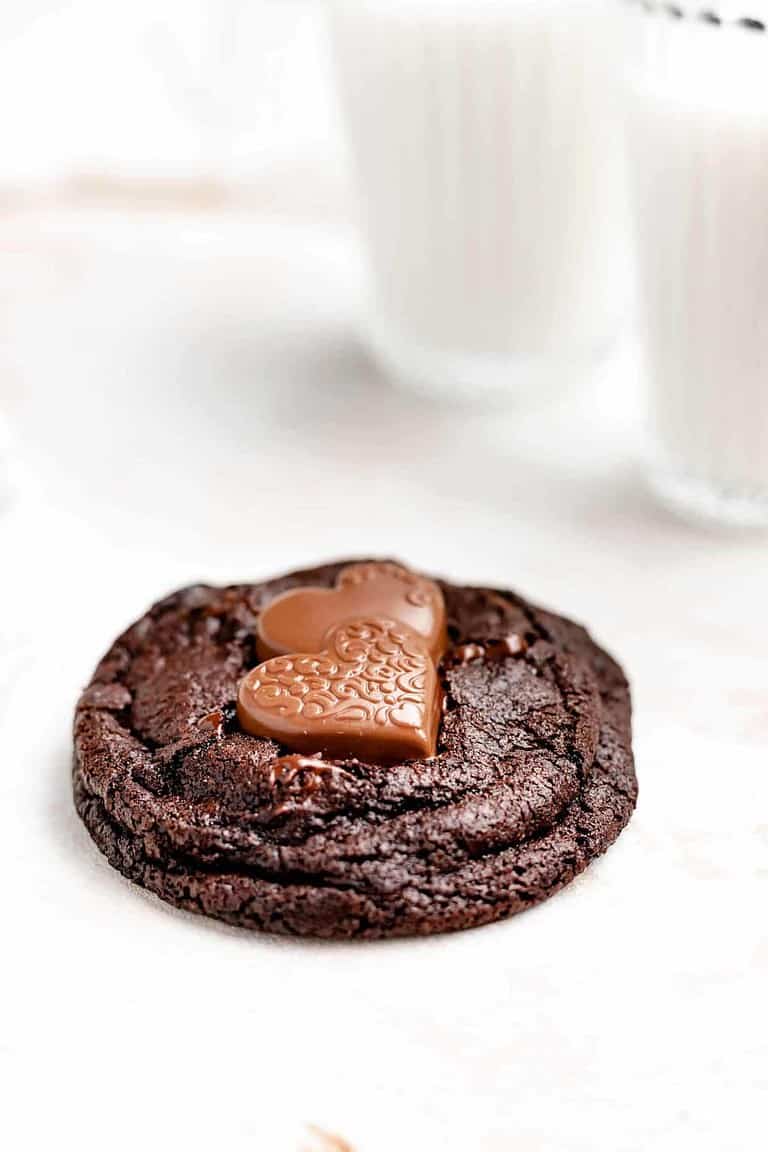 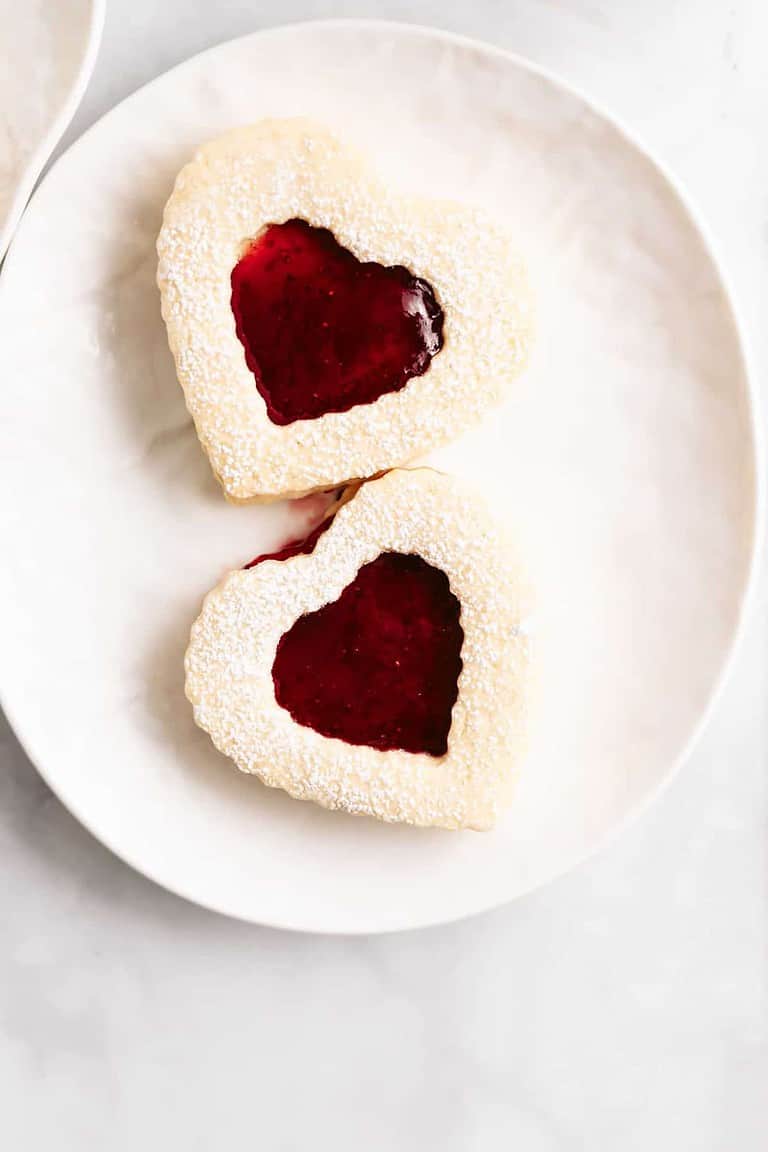